Posted on March 6, 2016 by JuanitaBuchan 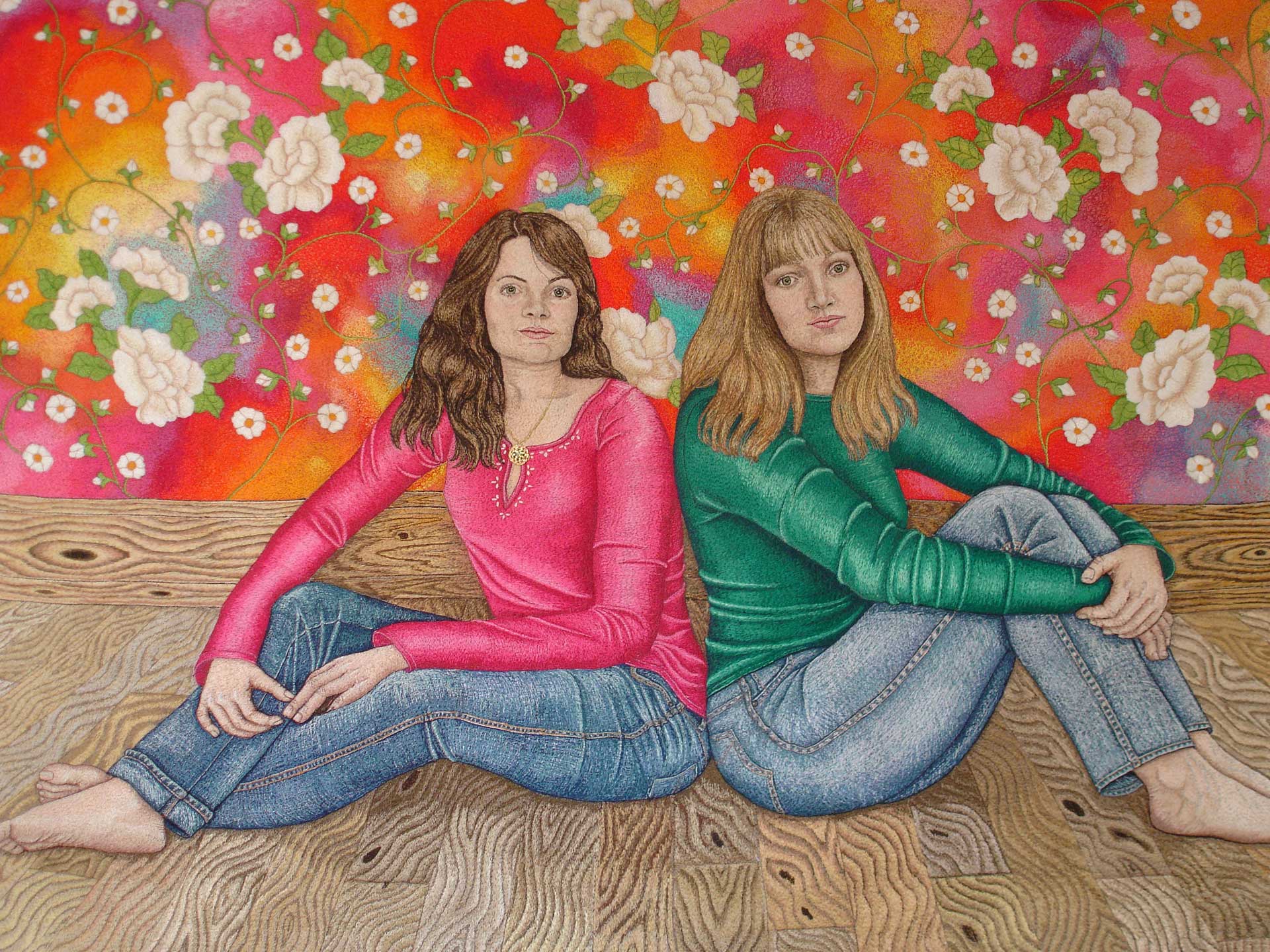 This article details how I fixed a problem with one of the faces in the textile portrait of my daughter’s – ‘shared jeans’.\r\n\r\nI wanted to work on a large piece (130cm square) so it would hang on a wall like a medieval tapestry. From a small black and white photo taken of my girls some time ago I took the inspiration to develop a colourful portrait. I then used a series of photographs including more up to date photos of the girls faces to work from.

It is important to start on a focal point such as the face, I did the eyes, nose and mouth by hand then I used free machine to fill in the face. The face of my older daughter (on the right) become very distorted at an early stage. One of the problems was with the long hair on my oldest daughter, the repetitive sewing in one direction pulled the fabric tighter, this caused the face to distort. I realised that I had a serious problem with my eldest daughters face and I needed to replace it, it took me a month to gain the courage to cut the face out and repair it.

I used a piece of tracing paper on top of the face to draw an outline onto the paper, I then pinned it down so it wouldn’t move and marked out the hairline that I have now. This was done to mark out where I needed to cut in order to remove the old face. Then keeping the paper pinned in place I slipped some chalk transfer paper underneath and traced the outline of the area to be cut out leaving me a chalk line ready to cut. I used a photo to draw a new face onto a piece of silk, I then painted some lines in with silk dye, then backed the silk with felt. I took time to carefully embroider all the main features by hand.

Once I finished the new face I cut out the old face from the textile using a very sharp scalpel. I then placed it behind the hole to check it was correct and used magic tape to anchor it from behind before sewing it in by hand. The new face had two layers felt behind silk, the face was embroidered but the hair was not, this was so I would be able to insert the face in the hole and lay the new silk hair over the old hair so that it could be incorporated into the piece effectively once I embroidered over the new hair.

Carefully using an over stitch I hand sewed the felt from the face and then the sides together. I then turned it over and used the machine to secure it with a zig zag stitch, at this stage the silk for the hair was still loose ready for the hair to be embroidered in. When the neck join was embroidered together it left her looking as though she had a weak jawline. To deal with this problem a small layer of felt was stitched to the jawline at the back and cut to push the chin out at the hairline. The hair was then embroidered on top securing the whole face with free machine embroidery.

I continued to make tweaks to her face, I was having great difficulty getting her expression back it was actually better at the start and very difficult to fix once changed. This highlighted the need for me to have good quality pictures to work from. Therefore when I had a visit from my daughter I took some new pictures to work from, however she had lost weight and cut a fringe into her hair so I needed to make further amendments to her face.

I added in the fringe this meant working over some of the existing hair, this made it stiffer to work with. I also used the shadows at the sides of her face to create the thinner face, this did put some of the proportions of the face out but she was beginning to look like her photo. Unfortunately for me the fringe was very short lived and she grew it back out.

I was still unhappy with my daughter’s face and I ended up placing some magic tape on her nose and redrew the nostril on top, from this I could see that I needed to reduce her nostril. I also reduced the size of her pupils by hand embroidering over the top. After this I felt I had finally reached a reasonable likeness of her.

The final thing I did to the faces was to create a skull out of felt by tracing the shape of the head and cutting this out, then layering felt pieces on top to create shape. This was attached behind the faces and served to fill out the areas that were warped due to all the stitching.

Although I made many mistakes on this piece I learned so much, I do love it and get a lot of pleasure from seeing it.

I decided to recreate my painting Abundance as a textile. Above – Abundance Painting (Acrylic on Wood) I usually use silk paint when painting onto silk however with this new textile I have used fabric paint and silk dye.  I wanted to create a detailed fabric picture, in the past fabric paints would often go […]

Painting and drawing faces is very difficult and it is no different when it comes to painting a face using thread.  The techniques I use to create faces in my work has evolved over time, increasing the use of thread as my confidence and skills have grown. The first textile faces I worked on was […]